We know very well that the military, security and “plainclothes” forces are invading the privacy of schools and educational spaces. During this systematic repression, they have taken lives of a number of students and children in Iran. From Nika and Sarina to Abolfazl and Asra Panahi in Ardabil and 14 students and children from Sistan and Baluchistan, Kermanshah, Gilan, Mazandaran, Kurdistan, Azerbaijan and Mashhad, and to Afghan refugee kids.

In the past weeks, the repressive apparatus of the regime has detained hundreds of students, which is in sharp violation of all accepted domestic and international laws; students are abducted in the streets, the security forces are raiding into schools and detain children, even elementary schools are targeted by tear gas. And every single day we hear news of newly arrested teachers either in the schools, in the streets, or in their homes.

Unfortunately, the Minister of Education not only does not protect the country’s education community, but he himself, handed with the notorious “Harasat” (the representative of the security forces at schools), has become a tool for repressing students and teachers.

The systematic shutdown of the Internet is just one other example of invading the basic rights the Iranian people. The government has done this illegal work in the past years to prevent the free circulation of information and to turn the truth upside down. “Freedom” was one of the most basic demands of the Iranian people in the 1957 Revolution, which became the main victim of the four decades of the current rule.

The CCITTA has repeatedly warned the government to stop invading the basic rights of people and using violence against protesters. It has called for recognizing the people’s right to protest, and to stop harassing students and militarizing and securitizing the educational spaces. But the government, in response, has rather made the methods of repression more intense and violent, to the extent that they even shoot tear gas in primary schools, and forcefully send students to the state-run ideological ceremonies that have nothing to do with education. And If someone does not accompany, they will beat him to death. They interrogate the students, and then instead of taking responsibility for their acts, they turn to creating false scenarios and forced confessions. They shoot at our students and kill them, then the cause of their death is attributed to “congenital disease”, “suicide”, and “dog bite” as we all have seen in the news.

The government and its military and security forces should know that the teachers’ community of Iran does not tolerate these atrocities and brutality. The CCITTA declares that we teachers are part of this people and that the bullets that these barbaric forces shoot at people in the streets are targeting our souls and lives as well. We are entangled with students, their families and the whole society. We cannot focus on the blackboards in the middle of shooting and firing. If the people and the society scream, we are part of this common cry as well.

Therefore, the CCITTA , in support of the protesters and in solidarity with their right and just protests all across the country, and in condemning the killings and repressions which have happened in the past weeks, and especially in condemning the killing and arrests of students and teachers, announces the following protest actions:
1- This council announces public mourning on Thursday Oct 20th, Friday Oct 21st, and Saturday Oct

22nd (Thursday 28th, Friday 29th and Saturday 30th of Mehr in Solar Calendar) in memory of the victims of the protests. In these days, we express our sympathy and solidarity with these bereaved families by visiting the graves of their beloved ones and symbolically wearing black clothes, wristbands, and other black coverings, and on Saturday we all wear black wearing when we go to school.
2- The coordination council announces a sit-in strike for Sunday, Oct 23rd, and Monday Oct 24th (Sunday 1st, Monday 2nd of Aban in Solar Calender). We, the teachers, show up in the schools on these two days, but we refrain from attending the classrooms.

By holding these sit-ins, the CCITTA once again declares its solidarity with the people. It also declares to the government that the basic demands of the teachers are the recognition of the people’s right to protest, and the unconditional release of all the arrested students. And as long as the students are not back to their classes and the government does not stop killing our people and children and replies the rightful voices of the people with bullets, we continue our protests. 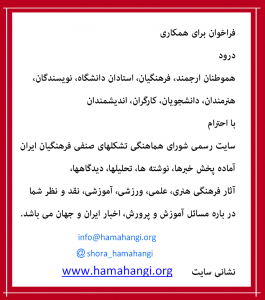